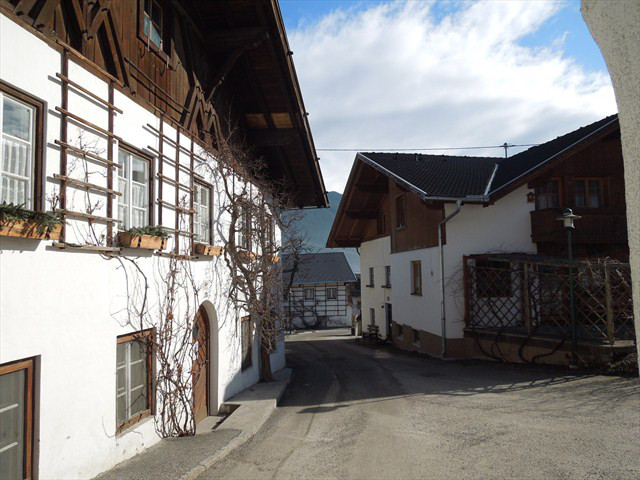 We have used the Municipality of Flaurling's cultural guide as a starting point to lead you through this attractive town near Telfs, in the Inntal valley in Tirol. The town was originally settled by the Bavarii and was first mentioned in the 7th century AD. Our tour through Flaurling will lead us past historical structures such as the Risschloss castle.

The walking tour will last approx. 1 to 1.5 hours.

Parking is available at:

The building was first mentioned in the early 17th century. In 1894 the master miller who lived there was appointed to run the post and telegraph office.

How many round windows adorn the facade of the house?

The village well is decorated with a statue of St. Isidore, the patron saint of farmers.

What colour are the statue's knee socks?

A former transit point for salt and an important corn storehouse

The building and its outbuildings played an important role as a salt transit point and corn storehouse. It also previously included a horse-changing station for couriers.

Take the single-digit sum of the digits of the year in the fresco on the building and add 2.

The "beim Schlössler" building was originally constructed as a defensive tower in the 13th century. Beginning in 1398, the Monastery of Stams extended the tower to the North. For 170 years, various tenants administered the property for the monastery.

Take the single-digit sum of the digits of the highest year on the wall of the house.

Before the bridge you will find a sign giving you your next clue. Then take the bridge over the stream and find the next waypoint.

How many large 1s do you see on the yellow sign?

Here you will find the penultimate clue to the treasure.

Which famous pilgrimage route is mentioned here? Count the letters of the name (without Tirol) and write the number down.

There is a memorial commemorating a particular jubilee directly in front of the Risschloss castle. The Risschloss castle was constructed as a hunting lodge for Archduke Sigmund, nicknamed "Rich in Coin", and overlooks Flaurling like a fortress. In 1496 his court chaplain, Pfarrherr (Reverend) Sigmund Ris, received the castle as a gift.

On the occasion of which jubilee was the memorial erected? Take the one-digit sum of the digits.

The gardens of the Risschloss castle are worth a visit. Simply follow the signs for the library to find your way into the beautiful and freely-accessible interior courtyard.