This multicache leads you to a fascinating industrial monument in the heart of Bad Lauterberg: the “Königshütte”. According to the season and the weather a cheerful, melancholy, fairy-like or even mystic atmosphere is waiting for you. If you like, you can learn plenty of things about the “Königshütte” (King‘s Iron and Steel Works) during this walk – but that’s not a indispensable condition. The cache is well-suitable for families, the terrain isn’t very demanding, so prams or even wheelchairs shouldn’t have great problems – perhaps apart from some days in the depth of the winter. The site of the “Königshütte” is for the most part accessible to the public, but it’s in private ownership and it’s well-cared. Some of the buildings are inhabited. Please, be considerate.

If you want to learn more about this old state iron works afterwards, visit the website of the support association (Förderkreis), which commits itself to the preservation of this monument: www.koenigshuette.com (the site includes an English version).

In the final you will find the coordinates of a bonus: The Cache After (OCBA57). 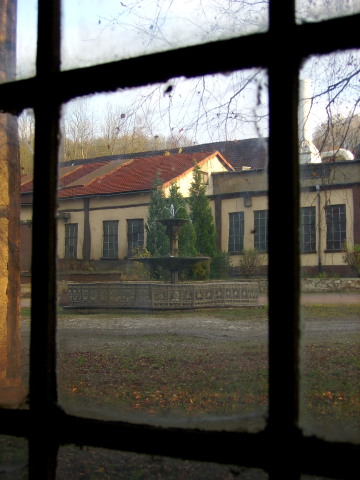 You will find the next task in a small cache. Walk in south-westerly direction. Soon, you will notice a grey object between the street and the river. On top it’s orange-coloured. And perhaps at the bottom something is hidden…

To be told in the cache at stage 2.

In former times, the workers of the “Königshütte” lived in this street. And at this place you can take a picture of how the iron works looked like in the past. Count the letter Ö on the wall (digit A).

So you’ve arrived at last at the “Königshütte”. At first you will learn, how often the great Goethe have visited this iron works. That’s not so interesting? Well, of course it is – because the number of his visits is digit I.

The “Königshütte” closed down several years ago. But the “Formhaus” has a special item, which still works 24 hours a day. Search its name (perhaps again a yellow fir-tree will help you, this time with the third word) and count the letters – you will get digit D.

In front of the “Hüttenschenke” (a sort of canteen, but the name meens public house) you probably will see double – at least if you take a look to the house number. One of them may come from own production. The first digit of this number is digit J.

This product of the “Königshütte”, which is most famous in town, is supposed to once have stood on a world exhibition in Paris. But nobody really believes in it. Anyway, it fits perfectly to its current place. There it’s using water from a nearby spring. It has no need for a pump – physics ensures that the water flows throughout the year. And in winter you can see fascinating formations of ice.The basic form of this object is polygonal. Count the corners. The sum of the digits of this number is digit G.

Have pillars really to be round always? Take a look at the “Eisen-Magazin” (iron store). How much pillars are somehow different (digit F)?

At this coordinates you should find a stone, which probably shows the initials of two persons. It could be found also by night. Step on the stone and take a look around: How much of the meanwhile well-known yellow fir-trees you can see from this position (digit E)?

Could you break free from the yellow fir-trees? Great! So devote your attention to the “Getreidemühle” (corn mill) now. The frontage of the mill is decorated with numerous rosettes, which also were casted on the “Königshütte”. Count the rosettes at the western gable-wall of this building – the number is digit H.
Became curious? You can have a look inside the building here.
By the way: Short after the corn mill the ditch ends and the water flows back into the Oder.

Well, now you’ve collected all digits, you need for the coordinates of the final. And it’s just like with every multicache: The final is the foundation of the cache.

Do you need more help? The hint tells you exactly, where the final is hidden (assuming, you are at the correct position ;-))