Szkoła katów / School executioners
Main
Main
Description
Legend of the school, the executioners, which was not

The school was established in the mind of the executioners of a journalist in the nineteenth century. Rapidly adopted among the sensational not even real, and so continues to this day.

To be rare for an individual trip or a tourist who arrived in Biecz not place the questions about the school executioners. And according to informants tell the historical truth as the former Biecz 600, 500, 400 or 300 years ago, when the capital was a vast Biecz county orchards were located here and the city had a right to the sword and the executioner was so-called holy champion of justice, who was performing death sentences, cut off the heads of condemned ax or sword depending on the state of origin, hammering the stake or hanged convicts, of whom there were many in this frontier area.

For the executioner was also torturing criminals such as screwing in a circle, or tearing of the skin belts alive interviewed. To this day, is kept in the basement of the town hall tower in Biecz Turma where criminals were brought, and the museum shows a sword, the executioner biecki was cutting the head and an entry in the book town of XVIw., Where the cities are listed in Biecz kata is borrowed and how much for this service paid.

Sometimes someone tells a joke that in order to obtain a master executioner (pronounced Master's holy justice) had to be apart of helping paruletniego angle, cut off the head of a tiny ant a big ax. In conclusion, one must conclude that the same angle in Biecz many related applications. 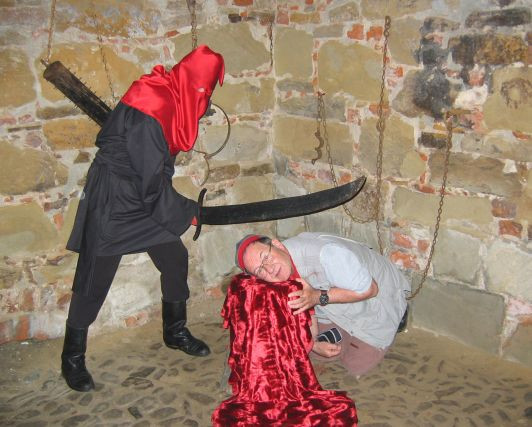