The road to the fold is marked with wooden marker, please follow them and stay on the roads, because the fold is located in a conservation area.
__________

Dachsbusch is a nature reserve in the municipal area Glees in Ahrweiler (Rheinland-Pfalz). It was declared by the district government of Koblenz by decree-law of 17 February 1984. It has a size of seven hectares. Protective purpose is the preservation of the geological outcrop, particularly the periglacial slip fold, for scientific reasons.
__________

The Gliding Fold in Glees

On the west side of the Dachsbusch a big gliding fold was developed due to digging. This gliding fold is a volcanologist and climate historically ground monument of great importance. 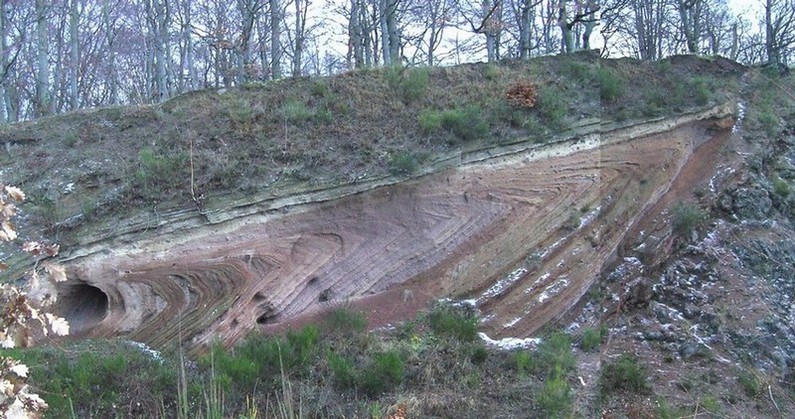 The origin of this geological attraction you can imagine are as follows:
During the various ice ages were the Rhenish Slate Mountains not glaciated. There was, however, permafrost during this cold period over longer periods of time. Also, the slope of the Dachsbusch with his ashes blanket was permanently frozen many feet deep. At times, this ground thawed in the upper 1 to 2 meters. Because of that the slope with wet ash began to slide down slowly. The seasonal changes alternated thawing (sunlit western slope) and refreezing often. The recurvaturezone of the gliding fold therefore characterized an isotherm, below the soil was permanently frozen for some time. Then the Dachsbusch was overflaunt by loess. This is visible as a thin yellow band. While the weather had still cold conditions with slope flow, flowed large pieces of basalt with loessmash downhill from the peak. This mentioned geological and climatic events probably occurred in the penultimate ice age.
At a later stage the Dachsbusch was showered by pumicetufferuptions on the eastern edge of the Wehrer cauldron. Through these deposits the gliding fold was protected from erosion.

In an outcrop on the western slope of Hill 371, you can see the age progression of the Wehrer-phonolite-ejecta. Here, the reddish Hüttenberg ejecta from the gray-Gleeser ejecta (top formation on the sliding fold) is superimposed.
Source: http://www.geomontanus.com/seiten/gleitfalte.htm 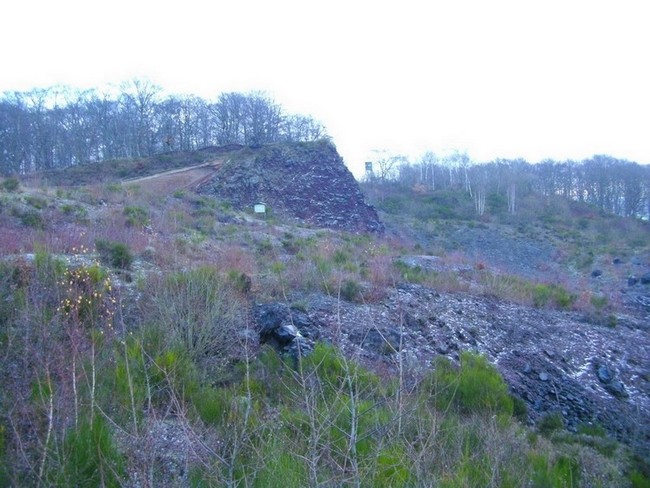 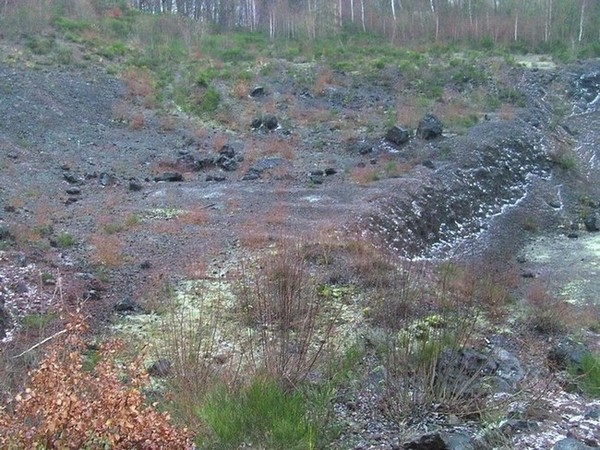 To log this earthcache please fulfill the following tasks:
Before logging, please mail the answers to the following questions, you can log directly, i´ll write you an info, if there is something wrong or missing:
1) How old is the gliding fold approximately?
2) What had protected the gliding fold?
After Logpermission:
3) Upload a photo with you or your gps at one of the both coordinates above (fold or information panel)
4) Upload a drawing or model of the gliding fold (logging requirement as guidelines want you to study about the place)

Thanks for your visit, I hope you enjoyed it.

English
© 2023 APRS Caching
Are you sure?
Please, enter a value here