On the 4th Nvember 2011 a new, cross-border road linking Schwennenz-Ladenthin-Warnik-Będargowo villages was accomplished and put into service. It was 6.8 mln złoty investition co-financed from INTERREG IVA programme funds and is an example of another mutual Polish- German project. The project consisted of the following items:

- reconstruction of the road on the Polish side, between Warnik and Będargowo villages (3280 meters)

- re-opening of the road between Warnik and Ladenthin

- reconstruction of the road between Schwennenz and Ladenthin

It would not be possible to finalize the project without subsidy from the EU funds and without co-operation between authorities of 4 counties: Uecker-Randow, Grambow, Kołbaskowo and Police.

“Today is a historical event. There used to be a well-developed communication network here but after the Second World War, the border between the two countries put the road that we are re-opening today out of existence for 60 years. After [Poland] joining European Union we are able to cross the border in any place and thanks to that many other cross-border roads between near-border counties has been reopened.” – said L.Guzdziol, the mayor of Police county. “From a point of view of the united Europe today is a symbolic and historical event. And from a practical perspective the road will facilitate mutual learning of the areas on both sides of the border and will bring the nearby villages closer to Szczecin city.” – he added.

The road seems not be well know as until now it has not been marked on some maps (e.g. UMP-pcPL as of 2012.07.03). The distance stated above is counted from the beginning of the road on the Polish side, from the crossing with Warnik-Barnisław road while the time needed to cover the distance by bicycle.

There are practically two ways to reach Warnik village from Szczecin: through Stobno/Bobolin or through Warzymice/Bęgardowo. I recommend the latter one, especially for mount bike lovers as on the way to the cache they can reach an 80 m.a.s.l.-high hill with an inspiring panoramic view on Szczecin city and nearby area: Bukowe (Beech) Hills on the left (the Kolowo TV-radio mast is visible in clear sky conditions) and Wkrzańska Forest on the right.

After reaching Ladenthin village there are 2 options to travel: to the south towards Pommelen and Nadresnsee or to the north towards Schwennetz and B113 road (there is a nice bicycle path along that road however not on the Schwennetz-Neu Grambow stretch). It is worth to get familiarized with the road to Ladenthin since this is one of the shortest connections from Szczecin to Germany.

When it comes to the cache: it is buried shallowly (however a spade might be needed), by the road, next to a distinctive landmark, just under the provided coordinates.

Note: Be aware of that the cache lies on the German side of the border – you might be controlled for ID or passport after crossing the border. 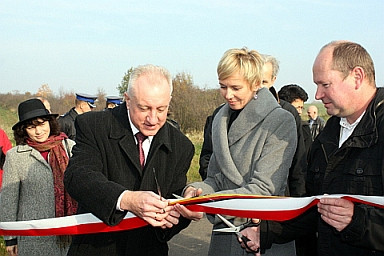