An eight around Kumberg: Past, present, future?
Main
Main
Description

Part 1 (General information about this cache)


Apart from classical virtual stages with given coordinates where easy questions have to be answered, this cache involves four additional tasks at unknown locations. To that end, you need to take along the following four photos Photo 1, Photo 2, Photo 3 and Photo 4.
None of the other photos in the gallery are needed.


The field work splits into two parts. You need to visit 9 virtual stages along the way whose coordinates are given. In addition there are 4 additional tasks along the way (no coordinates provided - this is the sole reason for which I added the fields puzzle icon) - for details see below.

The stage info has been put into boxes. At your own risk you can ignore the route informations provided in between the stage info boxes. My goal has been to make it possible to go for this cache without a map of the area. Note however that sometimes the right route is not easy to find and moreover that it is important that you take the intended route along the paved segments and not your own in order not to miss the locations for the additional tasks.
I strongly recommend you to follow the suggested route to Stage 2 and further on to Stage 3 to avoid problems!


Further way: (Auxiliary waypoints H1 and H2)
Turn right at waypoint H1. Follow the red-white-red marking until the end of the road to waypoint H2. From there take the small meadow trail down towards Stage 1.


Further way: (Auxiliary waypoints H3, H4, H5, H6, H7)
From the bridge take the trail that leads upwards into the forest and head for H3 (when in doubt take the right trail). At H3 turn left and follow trail 768 which will stay your companion for a while. Soon you leave the forest, follow the Waldweg (a road) up to the cross at H4. Now turn left into Wollsdorfstrasse that leads you down to the B72 road which you reach at waypoint H5 close to the former inn Bachwirt (worth to be looked at). Cross the B72 (be careful!) and follow the bicycle path until waypoint H6. There turn left into Eidexbergstrasse. Soon you can leave the road for a short episode in the forest by turning right, but will arrive back at the road before reaching H7. On your way you will pass a wayside cross with a bench where you can take a rest if you like.

At H7 turn right into the non marked small (municipial) trail which will lead you to Stage 2. The marked trail follows the paved road which I wanted to avoid. I urge you not use this trail in the darkness and not to ride a bicycle there (there are several houses and it's a dead end road that turns into a field and forest trail).


Further way: (Auxiliary waypoints H8, H9)
Originally I had planned to follow the unmarked trail until it meets the paved road again. This is however not possible as a farmer blocked the trail near its end. I introduced Stage 3 to ensure that the cachers take the right way and no trespassing issues arise if cachers try to find their own route. Do not believe the maps!
At H8 take the trail upwards into the direction of H9. From there walk up to the road (Fasslstrasse). The farm area you traverse/pass belongs to the same family than the nearby inn Altes Fassl.


Further way: (Auxiliary waypoints HA, HB)
Follow Fasslstrasse down to the B72 toward HA and cross the road with care. If you are hungry and like Chinese food, you can consider a visit to the inn Neues Fassl. In my childhood this inn has been a popular restaurant offering Austrian cuisine. I was recently told that the nearby (grocery) store Meinhart is endagered to get closed down. Times are changing .....

Fortunately, you can soon leave the B72 again. Turn left into the forest at HB and follow trail 1 towards Stage 4.


Further way: (Auxiliary waypoint HC)
The route is well marked in this section. Follow trail 1 further on to HC (there take the left trail) and further on to Stage 5.


Further way:
Continue to follow trail 1. Shortly before Stage 6 leave the paved road and enter the forest. Continue to Stage 6. I included that stage despite its closeness to the preceding stage as I wanted to attract attention to the tumuli which could easily be missed otherwise.


Further way: (Auxiliary waypoints: HD, HE, HF, HG )
Soon after the tumuli you will reach the road again. Note the wayside shrine and the dog station (English term used on the object - terrible mix of languages!) at HD. Now follow the trail down the meadow into the forest again. After a short forest episode you will reach the Schmiedgraben road at HE. Now follow the road until a the cross at HF. If you look uphill you will see an archway where the road leads through. The buildings belonged to the former inn Schmied (with an enclosed bowling alley), one of several buildings/objects in Kumberg which are under monumental protection.

Turn left at the cross and follow from now on (until Stage 9) trail 5 (to Hofmühle). After a short section along a small dead-end (paved) road you end up in a pretty private looking area (meadow, garden). Do not worry - the official hiking trail leads through there. If you look carefully, you can already see the next sign post at HG. There turn right and follow the trail down the meadow towards Stage 7.


Further way: (Auxiliary waypoints HH, HI)
Walk over the bridge and continue on the meadow trail. You will now cross a paddock with horses (two at the time of my visit which both were harmless and friendly and did not care about me). There is a gate (close it properly after your passage) at the entrance to the paddock and a sqeeze stile at the exit.
Follow trail 5 further into the direction of HH until you end up in the village Rabnitz close to the equipment depot of the fire brigade. Turn left into the paved road. After having passed the wayside shrine turn right into Dorfstrasse (dead-end street). Soon you will pass the must tavern Hiebler (open March-October, Fr, Sa and Su from 2pm onwards) on the left side of the road at HI.

If the weather permits you will have a nice view to the castle Kainberg and to Kumberg along your way. After a while the paved road ends. If you are tired, you can have a rest at the bench there. Take the right trail (gravel trail) towards Stage 8.

After a short episode on a gravel road section a nice forest area section waits for you. Take the right trail at HJ.

On your way to Stage 9 along the Rabnitz (passing impressive ferns and old trees) you can pay a visit to the cache Freundschaft.

Further way: (Auxiliary waypoints HK, HL)
Trail 4 will lead you back to the parking location. The waypoints should be sufficient also for those without map. 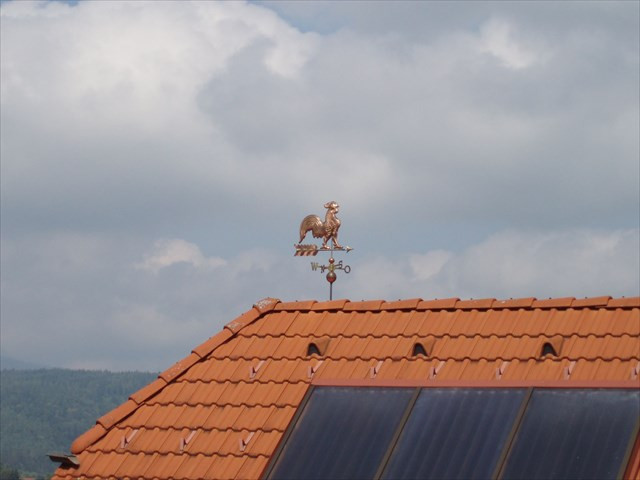